After the collaborations with Egokind for his stunning EP´s it was time for his own project here on Traum! With “Veiled In Blue” Parra for Cuva has created a stunning debut on our label. Enjoy the official video for his stunning track “Elara”

Not much is known yet about the Berlin artist Parra for Cuva, but he has collaborated already with Egokind on Traum and has released a handful of solo EPs which have already put him on the map for certain lovers of music.
The Cologne born artist is studying audio design in Berlin at renowned hdpk – Hochschule der populären Künste. He has been expanding his craft, based on a classical and jazz piano education. His music is like a mousse of tunes and twirls, intertwining, falling apart, folding and unfolding at the same time.

Parra for Cuva’s music is in fact an artistic blend of super chill out, slow beat feeling and a rather eclectic approach to House music. All based on innovative and unorthodox sound recording techniques and an intricate arrangement which locates it in the modern world of daring music. His studio is according to him crammed with instruments, equipment and gadgets.
As he put’s it in his own words: “For me often the choice of sounds make a track rather then the big studio”. 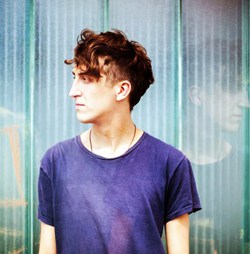 The opening track of his EP “Veiled In Blue” is an introspective and self-examining one, a piece of composed music which could describe a sensual situation that takes place in a well protected and sheltered world. Maybe a tiny room in the attic or a groomed world where every single element is chosen carefully. Parra for Cuva has written a charming tale, picturesque and captivating.

“Turning Rest” is a piece of music with a cinematic feel to it. It is a joyous track which evolves in a very natural way. It almost floats into each other… with no edges or constructed obstacles making life difficult.
Certainly also here there is a Überbau (superstructure), consisting of a heavenly feel which allows you to look down on moments that seem comical but are not really… stories that are unfinished but beautiful in their intentions and naivety.

“Elara” seeks beauty in a stylized and choreographic portrayal in Technicolor. Like “The Umbrellas of Cherbourg” with no storyboard. Also here Parra for Cuva uses simple but sincere rhythms to transport his composition gently into your ear.

Parra recorded “Creature” together with Ascii Code. It is a track which consists out of two identities… melodies that are contemplative, longing and even a bit melancholic and a more brash acceleration of louder beats.

The last track of the EP “Antesia” was written by Parra for Cuva and French artist Viken Arman. “Antesia” has several melodies gently colliding with each other. On the other hand they’re embracing quality is enormous and evolves in a masterfully crafted light hearted feeling. – See more at: