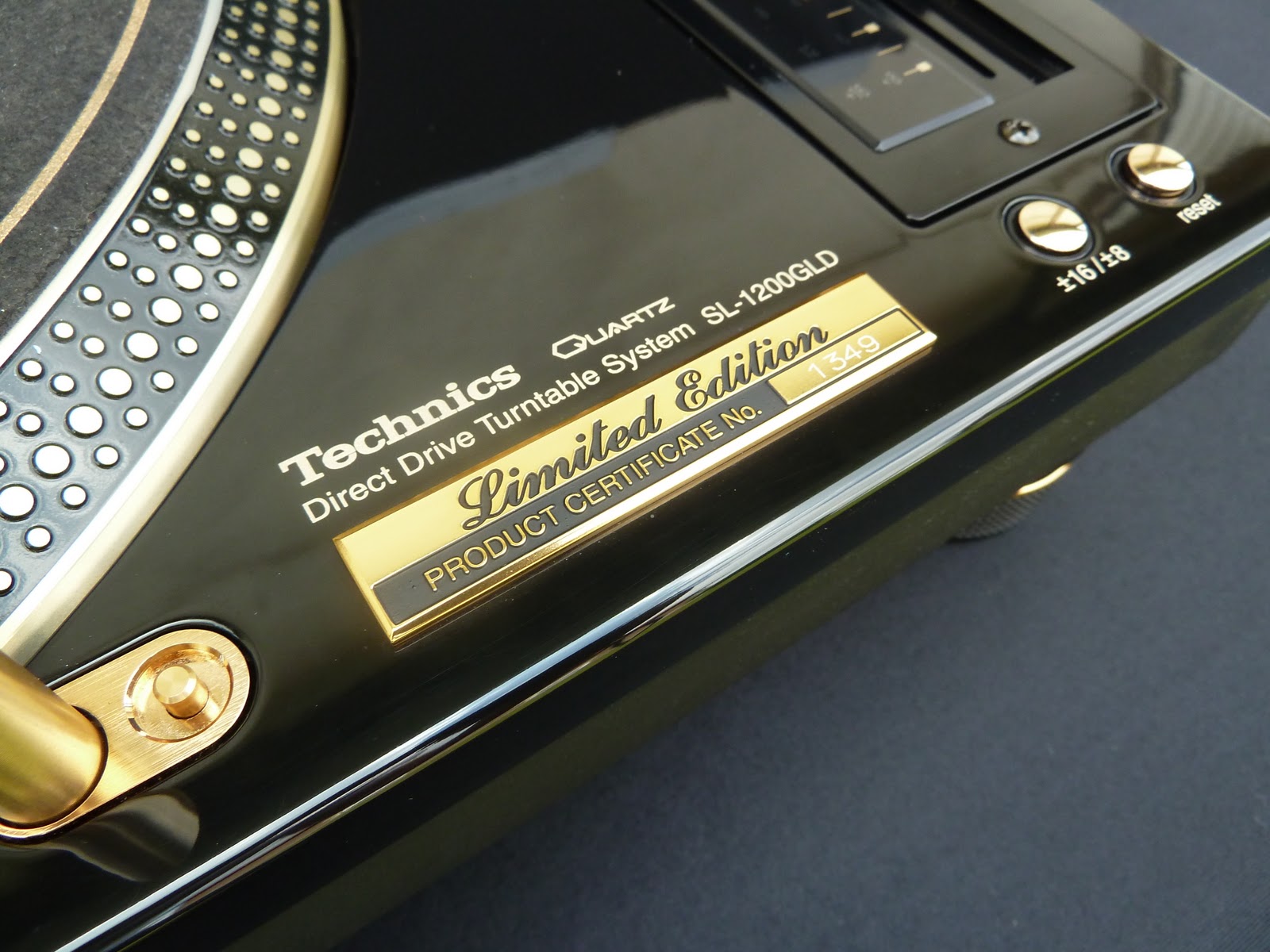 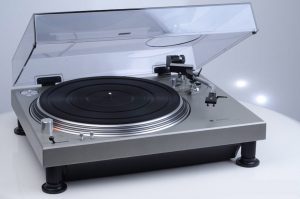 The SL-1200 was revealed in 1972 as an evolution to the SL-1100. The table was considered “the middle class player system” as coined by the media in the 70’s. This table set the foundation for the MK2 with rotational pitch control and rotational stability. 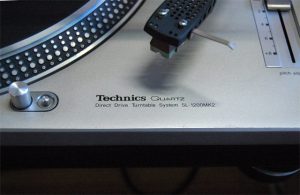 SL-1200 MK2
The SL-1200 Mark 2 was introduced in 1979 as an update to the SL-1200. It represented a culmination of Technics Turntable Innovations. It was dubbed as “The Middle Class Quartz Direct Drive”. It was not released as a professional model, but became popular with pioneering hip-hop DJs. It soon found its way into disco clubs as well as radio stations for airplay because of its vibration dampening ability and resistance to feedback. Model numbers indicated colour; the 1200 (silver) and 1210 (matte black). This was the same in the US and Japan initially, however later the 1200 was available in both silver and matte black finishes.
The SL-1200MK2 (released in 1979) came in both silver and matte black. Technics improved the motor and shock resistance, added a ground wire, and changed the rotary pitch control to a slider style. This became the base model and is the oldest with production until 2010. The older version of this model that was sold in the 1970s and 1980s has a large 4-inch-diameter (100 mm) plate where the RCA and ground wires enter the unit, while the newer version has a smaller 2-inch-diameter (51 mm) hole in the rubber where the RCA and ground enter. International versions of the SL-1200MK2 included switches for line voltage and frequency beneath the platter.

The SL-1210MK2 came in satin black metallic finish and is nearly the same in function as the SL-1200MK2, although some of the circuitry inside is updated to use fewer types of pots and resistors.The Technics 1210 series also had a switch to change between voltages on the underside of the platter. It was unavailable from official Panasonic dealers in the United States.

The SL-1200MK2PK has a matte black finish, and was only available in the USA.
The 1200 MK2 got a revised tonearm with a locking spin collar that allows for tone arm height adjustment (VTH) 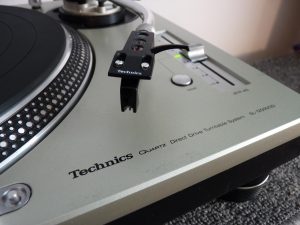 SL-1200MK3 (released in 1989)
The SL-1200 MK3 had a matte black finish like the MK2, gold RCA plugs, and a small gold-foil Technics label on the back. It was destined only for the Japanese market.

SL-1200MK3D (Japan only, factory gold RCA cables, black finish)
SL-1200M3D (released in 1997) has a silver finish like the MK2, a detached dust cover (no hinges), and no self-locking detent (“click”) at the zero point of the pitch adjustment slider, allowing more precise control of pitch near that point. It has a reset button that sets the pitch adjustment to 0, regardless of the actual position of the pitch adjustment slider. In addition the M3D series has unique details: the brand and model label is printed in a single line instead of two; and the stroboscopic light is red with a slightly orange tone.
SL-1210M3D is the same as the SL-1200M3D except with a matte black finish like the MK2 and a voltage switch. 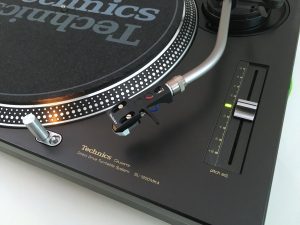 SL-1200MK4
The SL-1200 Mark 4 was introduced in 1996. It was an update to the SL-1200MK2.
Only available in Japan / Southeast Asia Markets Price for around $650.00. It has a matte black finish like the MK2, This model is aimed at the hi-end audiophile market rather than DJs. It is the last model made with the detent (“click”) in the neutral position (+/- 0%) of the pitch adjustment slider. In addition to the existing 33 RPM and 45 RPM buttons, the MK4 adds a 78 RPM button. It is designed to be used with regular removable RCA cables (along with a removable ground/earth cable) rather than having hard wired RCA cables like all other 1200/1210 models. 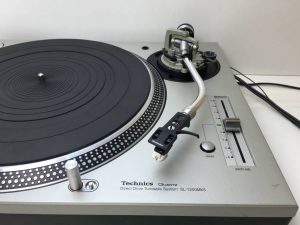 The SL-1200MK5 had a silver finish like the MK2, increases the range of anti-skate settings from 0–3 grams-force (0–30 mN) to 0–6 grams-force (0–60 mN). It has a white LED target light (previous versions only had an incandescent bulb). Current MK5 models have a removable lid with magnets as opposed to the MK2 and MK3 removable hinged lid.

SL-1210M5G (released on 1 November 2002) has a glossy black finish with silver speckles. It was a special 30th-anniversary edition. It was initially launched in Japan only (together with the MK5) but then became internationally available. It switches between ±8% and ±16% ranges for pitch adjustment, and the pitch control is digital. It also features blue target lights and blue pitch-number illumination. The brake strength potentiometer, although still located beneath platter, can now be adjusted, unlike previous models, using a small plastic knob. Minor improvements over Mk2, Mk3, Mk4, & 1200LTD include improved tonearm mounting and oxygen-free copper wire, improved vibration damping in the body, improvements to pitch control accuracy and better LEDs. 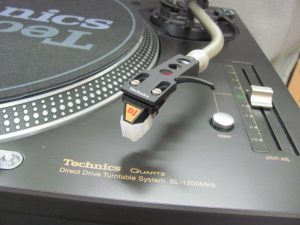 SL-1200MK6-K & SL-1200MK6-S (released in February 2008 in Japan)
With minor improvements including improved tonearm mounting and oxygen-free copper wire, improved vibration damping in the body, improvements to the pitch control accuracy and better LEDs. -S model has a silver finish like the MK2. 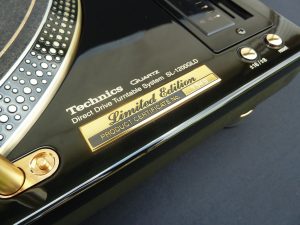 These were limited edition versions, with 24 karat gold plated metal parts including tonearm and buttons.

SL-1200LTD
The SL-1200 Limited Edition was introduced in 1997 to commemorate the 25th anniversary of the SL-1200 series. Only 10,000 units were made, all of which sold out in less than a year. Like the MK3D, it has a pitch reset button, but differs in that it also has a self-locking detent at the zero position of pitch adjustment. This model has a piano black gloss finish and gold-plated hardware. It was priced at about US$1200.00.

SL-1200GLD (released in 2004)
The SL-1200GLD was another limited edition model, with only 3,000 units manufactured. 1,500 of them were sold in the U.S. and the other 1,500 internationally. It is based on the MK5G model, with blue (instead of the regular white) target lights, a piano black gloss finish, and gold-plated hardware.
Many “non-official” special models of the SL-1200 and SL-1210 appeared over the years, mainly given away as prizes for turntablism, most notably the DMC World Championship, who awarded the winner a pair of 24K gold plated Technics turntables. Due to the customisation trend that has grown in the DJ community, many local events or competitions gave away custom coloured or finished units.

The SL-1200 series was developed by Technics parent company Matsushita in an attempt to solve problems related to turntable designs of that time. The task included minimizing acoustic feedback, unwanted resonances, wow and flutter and speed errors affiliated with cassette tapes or any audio reproduction that utilized rotary components.

This was achieved by designing a heavy plinth (base) made of a non-resonant composite sandwiched between a cast alloy top plate and a solid rubber base. In addition, the adjustable rubber-damped feet insulated against acoustic feedback, which can be a serious problem when operating a turntable in close proximity to loudspeakers (a common situation for DJs).

The drive system designed by Matsushita is direct-drive rather than the more commonly found belt-drive type. This design was developed to reduce wow and flutter and produces a very quiet turntable which, for a direct-drive turntable, has minimal motor and bearing noise, (although the bearing rumble does tend to become characteristic in well-used turntables). This was partially achieved through the fact that the SL1210/1200 was the first (and only) turntable to actually make the platter a part of the motor mechanism as opposed to attaching it via screws or magnets as is the case with most direct-drive turntables. On the underside of the platter a large magnet is placed over the spindle, surrounding the coils and forming the motor drive, thus eliminating loss through power transfer. The SL-1200 utilizes a Frequency Generator Servo Control Quartz Lock system that is claimed to produce the most accurate and consistent speed possible. The system is immune to static and dynamic stylus drag which otherwise cause unwanted speed variances that change the pitch and tempo of the music.